The Reality of Lizards:

A Verse I Just Wrote, Though I Should Have Written It 25 Years Ago

A very few gurus and wizards
Can grasp the reality of lizards.
From their tightly knit scales
To their very long tails,
Their kinship to us has been scissored.

A Pair of Intentions Figure Out How to Team Up

My initial plan was to write about a funny incident that happened twenty-five years ago, when I put a statement on permanent record in a public venue. This statement had a certain vitality, but it made no sense to me or to anyone else. Since this small-scale misadventure in communication occurred at a time of large-scale trouble in my life, it was my initial intention to use this story as evidence to support a proposition I have often tested: humor and merriment can cohabit with misery and calamity.

That intention turned out to need a little help.

But another intention—to use this story to help society deal with the inescapable reality that public figures sometimes say goofy things—stepped forward to lend a hand to the first intention, and thereby saved the day.

A Misadventure in Proofreading in a Very Difficult Time

In the summer of 1996, “The West,” a documentary made by Ken Burns and Stephen Ives, was released on public television. Since the project had benefited from support by the National Endowment for the Humanities (NEH), and since I had been an adviser for that film, the NEH’s magazine, Humanities, featured a long interview with me. Sheldon Hackney, a very good soul who was the Chair of the NEH, conducted the interview. 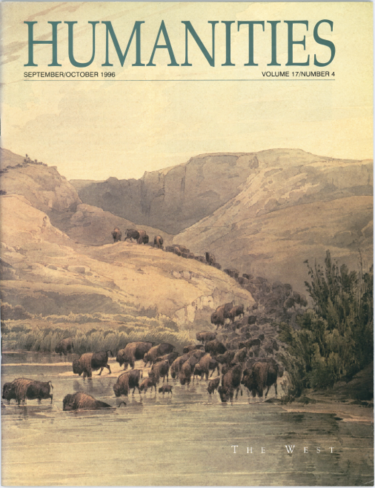 Toward the end of our conversation, Hackney said this to me:

Now, for the question that I’m not sure has an answer, how do you account for this great flowering of scholarship and writing in general about the West, fiction as well, in the last fifteen years?

I took the bit and ran with it.

I drew a stark contrast between what I saw as the inward-looking, self-preoccupied nature of the literature associated with the Northeast, and the equally intense, but far more expansive and grounded spirit that characterized the literature of the West in the 1980s and 1990s. Here is my response, as it appeared in the published interview:

When I was in graduate school [in the 1970s], there were all those New Yorker stories of people sitting by pools in the backyard in Greenwich [Connecticut] talking agonizingly about their relationships. I like Updike and John Cheever and so on, but it seemed like there was something missing. . . . So I think there was a niche to fill. In the West, there were writers ready to write about the reality they had grown up with, the reality of small human communities in big open spaces, and the reality of lizards. . . . Those were real stories. They were such a world apart from these people in Manhattan restaurants sorting out their relationships.

To give this massive generalization some ballast, I referred to “stories like Ivan Doig’s agonizing story about his grandmother and his father and him trying to save a flock of sheep that were trying to kill themselves running from a thunderstorm.”

After Sheldon Hackney and I concluded our wide-ranging exchange, the interview was transcribed. By the time the transcript was completed and ready for review, my life had gone off a cliff.

My first husband Jeff Limerick had his first stroke at age forty-eight. He was in the Intensive Care Unit at Boulder Community Hospital when a packet from the National Endowment for the Humanities arrived at home, containing the transcript of the interview with Sheldon Hackney. I was instructed to review it fast and note any corrections before it went into print.

So there I sat in the ICU waiting room, pushing myself to pay close attention to this lengthy document. As I look back at my dutifulness, I am myself a little mystified as to why I designated this proofreading as a priority in such dire circumstances. But I surely had reasons for seizing distraction when it came into my reach, though distraction did not entirely maximize effective error-detection. For instance, the printed version spells Ivan Doig’s surname as “Doeg,” strong evidence that my mind was elsewhere.

Despite an error or two of spelling, whoever transcribed this lengthy interview was a person of strong character, well-endowed with the qualities of bravery and determination. Nearly every statement, quoted from me in the transcription, still made sense to me—except for four words.

What could I possibly have meant by “the reality of lizards”?

Which Western author had written with force and eloquence about this?

Stationed in the ICU waiting room, I tried as hard I could to think of the short story or novel or memoir or poem that had conveyed this zoological reality with such memorable intensity.

So I gave up and authorized the reality of lizards to appear on permanent public record.

But I never stopped wondering about what I could have been thinking: Which writer? Which lizards? Which reality?

The Search Continues, and Finally Reaches a Surprising Conclusion

Quite miraculously, Jeff recovered from that first stroke, and he and I returned to something pretty close to normal life. When the special issue of Humanities on “The West” appeared in the Fall of 1996, there was Sheldon Hackney’s interview with me, and there were the lizards.

But I kept wondering.

These were the days when, as my treasured friend Alvin Josephy used to observe, the circuit of Western writers’ conferences was more packed than the circuit of Western rodeos. So I often found myself positioned to ask creative writers, English professors, and historians if they could help me identify those literary lizards.

A year or so after the Humanities interview came out, Ivan Doig himself—properly spelled this time—visited the Center of the American West as a distinguished lecturer (several years later, he returned as the winner of our Stegner Award). Since Ivan was a preeminent figure in the renaissance in Western American literature, it seemed very likely that he would be able to help me. 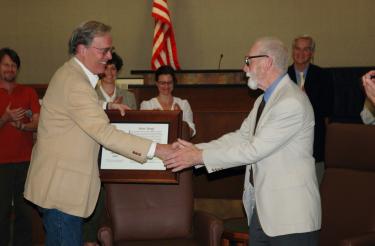 And so, as several of us from the Center of the American West were having lunch with him and his very knowledgeable wife, Carol, I asked them if they had even a guess as to what I had meant when I invoked the reality of lizards.

But, no, they did not have a clue.

Our conversation then moved onto more promising topics. As we chatted about the robust state of Western American writing, Tom Precourt, who was then my valued comrade in his role as the managing director of the Center of the American West, seemed lost in thought.

And then illumination hit.

“What about blizzards?” we all asked him.

And then we all got it.

The reality of blizzards. 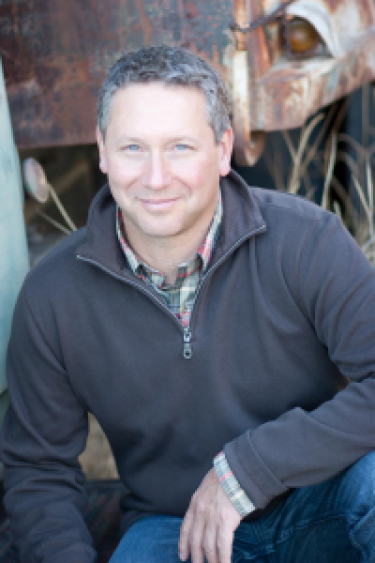 There is no shortage of memorable blizzards in Western American literature. And, just as I had intended when I brought them up in my Humanities interview, as stark encounters with life and death, those blizzards offered a dramatic contrast to my characterization of the writings of Northeastern writers like Cheever and Updike.

At the lunch gathering where this mystery was finally solved, merriment ruled. And comparisons between the reality of lizards and the reality of blizzards kept the hilarity in motion for quite a spell.

In truth, I can’t say that the merriment brought into being by this ridiculous misunderstanding has ever let up, even though its association with loss and tragedy never let up, either.

Jeff Limerick died in 2005. Ivan Doig died in 2015. Sheldon Hackney died in 2013. But even when I face up to this context of lives cut short, the merriment aroused in me by that phrase—the reality of lizards—does not diminish.

But another form of public service has been placed within my reach.

Multiple misadventures in communication have positioned me to address a great vacancy in our society in 2021. I have conjured up ways for people who express themselves on public record to say to the world:

Here is a statement I apparently made. But I actually don’t know what I meant by it. Can you help me figure this out?

Staying Anchored in the Reality of an Adaptable Schoolteacher

I conclude with a story that only needs to be enjoyed, rather than figured out. This story is thematically on point: it is about a Western lizard who encountered an unusual reality, and who had the good fortune to share this reality with a schoolteacher who knew when she was having experiences she should record.

Born in 1854, Angie Mitchell and her family moved to Prescott, Arizona in the 1870s. As a teacher, she was resourceful, good-humored, self-reliant, and very attentive to the interesting twists and turns of her classroom work.

Here, in her words (quoted in bulk, and not paraphrased) is the story of a lizard and a human who collaborated to endow us with a valuable lesson in adaptability and tolerance.

I furnished a good deal of amusement for my school today quite unexpectedly. I was hearing a Geography class & feeling something tugging at my dress as if there was a weight on it—shook it and went on with my class; presently feeling it again I looked down & there lying on my dress skirt in a ray of sunlight was as hideous a reptile as I’ve ever seen. He was black & yellow & tawny & had a body like a monstrous lizard & a “spiky” looking tail & a head like a snake & was over a foot long—Lord! I gathered up dress & with a yell one could hear a mile jumped on the stool [where] I had been sitting. The commotion that ensued beggars description. Ida & Laura nearest me—glanced down saw the reptile & promptly followed my example—the littler ones cried from fright at our strange antics, and everything was confusion, but when the Arizonans saw the hideous thing—they laughed and said, “Why, teacher, that’s nothing but a Gila Monster.” Well, I’ve heard lots of stories about these uncanny dwellers in Arizona but I’ve never seen one before—at least on his native heath. I was sufficiently reassured to collect my wits but I took pains to jump off my stool on the side the “monster” was not—then I gave a sudden recess & asked for information.

I’ve forgotten to say that the Gila monster who gave me such a scare comes out every morning and sun’s himself & I’ve taken to picking him up gingerly by the tail & putting him back of my desk where he lies out at full length in the sun & sometimes snaps up an unwary fly & seems to enjoy himself greatly. I’ve ceased to fear him tho’ it will be long before I shall consider him handsome. I stroke his scaly back with a pencil & he likes it apparently.

In Conclusion, an Opportunity for Readers

The next time you encounter the stereotype of young women as frail, anxious, and needing to be rescued from challenging situations by protective men, you can quickly challenge that stereotype by saying, “This reminds me of a story I once heard about the reality of Gila Monsters . . .” 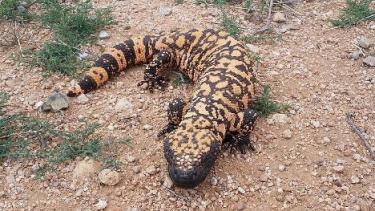 Reading You Are Likely to Find Interesting

Ivan Doig, This House of Sky: Landscapes of a Western Mind (1978). The story of the storm, referred to in the quotation from the Humanities interview, appears on pp. 217-222; the power of that story is summed up in Doig’s statement, “As much as at any one instant in my life, I can say, Here I was turned.”

Excerpts from Angeline Mitchell Brown’s diary appear in Ruth B. Moynihan, Susan Armitage, and Christine Fischer Duchamp, editors, So Much to Be Done: Women Settlers on the Mining and Ranching Frontier (1990), pp. 270-288.

If you find this blog contains ideas worth sharing with friends, please forward this link to them. If you are reading this for the first time, join our EMAIL LIST to receive the Not my First Rodeo blog every Friday.