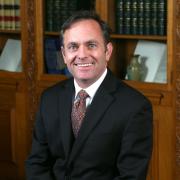 Hybl is the recipient of an Honorary Degree, which recognizes outstanding achievement in one or more of the following areas: intellectual contributions, university service, philanthropy, and/or public service. He serves as president and chief executive officer for El Pomar Foundation and vice president of The Garden City Company. A regent emeritus and chair emeritus of the CU Board of Regents, on which he served from 2007 until 2018, Hybl currently serves as chairman of the National Cybersecurity Center, Corporate Secretary for Junior Achievement USA, and on the boards of the American Council of Young Political Leaders, Employers Council, and Exponential Impact. He is a founding member of the UCCS Development Corporation, senior strategic adviser to the UCCS chancellor, and served as co-chair of the Ent Center for the Arts capital campaign. The El Pomar Foundation has provided grants to CU totaling over $20 million; Hybl also is a longtime personal donor to the university. He earned bachelor’s and Juris Doctor degrees from CU Boulder and is a former Air Force captain and judge advocate. 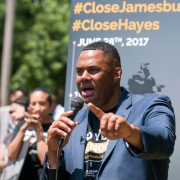 Haygood received the Distinguished Service Award, which recognizes those persons whose achievements and contributions are particularly associated with the state and/or nation. A nationally respected civil rights lawyer, Haygood serves as president and CEO of the New Jersey Institute for Social Justice, where he leads a majority-women of color team of racial justice advocates whose cutting-edge work seeks to build reparative systems that create wealth, justice, and power for Black, Latina/Latino and other people of color in New Jersey. In 2021, Colorado Law honored Haygood with its award for Distinguished Achievement—Special Recognition for Outstanding Leadership in Civil Rights.

Under Haygood’s leadership, the institute’s advocacy led to the historic restoration of the vote to 83,000 people on parole and probation; automatic and online voter registration; ending prison-based gerrymandering for state legislative redistricting; a $15 minimum wage; the reporting of COVID-19 racial data; and New Jersey becoming the first state to test all its incarcerated youth for COVID-19. Before leading the institute, Haygood served as deputy director of litigation at the NAACP Legal Defense and Educational Fund Inc., where he litigated key civil rights cases. Haygood earned his JD from the University of Colorado School of Law and bachelor’s in American History and Political Science cum laude from Colorado College.