The new OneSearch is here! Try it out & tell us what you think.

The Business Library is named for University of Colorado alumnus William M. White (Class of 1933) whose family's support was instrumental in its founding.

Generous support for the Library has also been provided by the following alumni and friends: 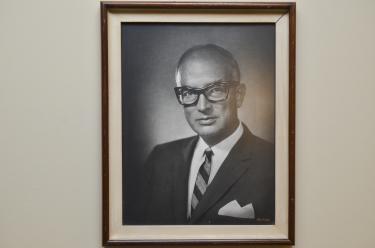 The library is named for William Mathews White of Pueblo, Colorado. An alumnus of the University of Colorado, industrialist and financier, and a man of generosity and public spirit, he brought honor and distinction to his country, his community, his family and to his university.

Mr. White was born November 11, 1911, in Pueblo, the son of Asbury and Lavina Pearl (Tarter) White. Asbury White was a leader in southern Colorado business. He was founder of the successful firm of White and Davis, the city's first department store.

In his boyhood and school years, William M. White shared the experiences of youth in a growing western city whose social spectrum was broad and whose economy ranged from modest enterprise to the West's largest steelworks. Upon graduation from Centennial High School in Pueblo, he enrolled in the University of Colorado Boulder and in 1933 graduated with a Bachelor of Arts. He immediately established in his native city and state the solid foundations of a business and financial career that was to win him national prominence.

Two of the most respected and influential families of Colorado were brought together in 1935 by the marriage of Mr. White and Helen Elizabeth Thatcher of Pueblo, daughter of Mahlon D. Thatcher, Jr. The Thatcher interests had grown from the founding of the First National Bank in 1872 to dominance in Colorado finance with ownership and control of thirty-six banks.

Compelling loyalties and determinations shaped Mr. White's life. He was devoted to his wife and their two sons, Mahlon Thatcher White and William Matthews White, Jr., both of whom he guided toward their own distinguished places in business and society. He paid fond attention to the White home estate, Walking Winds Farm, which he established on a promontory overlooking the Arkansas River just east of Pueblo.

Early zeal for civic responsibility led to Mr. White's acknowledged leadership in educational, social, business and industrial affairs in Pueblo and Colorado. Through his personal encouragement and financial help, many young people were prepared for promising careers. Meanwhile his competitive acumen, forthright judgment and abundant enthusiasms won him recognition and associations far beyond his home sphere.

Mr. White's zest for the out-of-doors and his respect for natural resources were expressed in many ways. He operated Trail's End, a modern ranch near Westcliffe, Colorado, where he bred registered Hereford cattle and Arabian horses. He championed the conservation of wildlife through scientific control of species and regulated hunting and fishing. He returned with record trophies from adventures in big game country. His gun collection was one of the most complete in the West. He became an authority on early day railroading, on frontier lore, and Indian arts and crafts.

Immediate demands never deterred him from sharing his executive and counseling skills in the service of national corporations, educational institutions and charitable foundations. Mr. White was director and executive committeeman of the Colorado Fuel and Iron Corporation (late CF&I Steel Corporation), Great Western Sugar Company, Golden Cycle Corporation, and Smyth Worldwide Movers; a director of the First National Bank of Denver, the Colorado Milling and Elevator Company, the National Western Stock Show, the Jefferson County Bank, and the Central City Opera Association; a trustee of the Colorado Springs Fine Arts Center; a member of the Board of Visitors and Governors of St. John's College of Santa Fe, New Mexico, the Advisory Board of St. Mary's-Corwin Hospital in Pueblo, and Colorado Advisory Board of the Mountain States Telephone and Telegraph Company; and a member and past president of the Colorado State Chamber of Commerce.

In 1966 Southern Colorado State College in Pueblo bestowed an Honorary Doctor of Business Degree upon him, and he delivered a memorable address at commencement exercises of that new institution. In 1954 he was awarded the Business man of the Year Award by the University of Colorado School of Business.

The Governor of Colorado, the Honorable John A. Love, said of his friend: "Bill White was an outstanding member of the Colorado Community and a great representative of the Thatcher-White banking families. Colorado will greatly miss his creative abilities."
- by Alexis McKinney 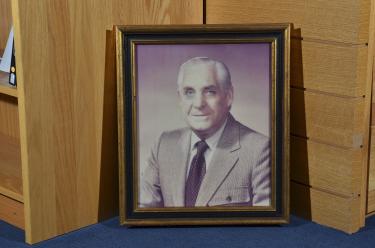 Douglas H. Buck was the son of a mining engineer and a nurse. He graduated from North Denver High School and worked as an office boy for Colorado Fuel and Iron in order to enroll at the University of Colorado. In 1929, with an accounting degree in hand, Doug went to work at an investment firm. The stock market collapse combined with the subsequent Great Depression profoundly affected his outlook.

In 1936 he founded an insurance company to provide working families the means for a decent funeral. That business grew to include general life insurance. He sold the company in 1965 and then used his experience to pursue new business opportunities until his death. His first business, Capitol Cooperative Life Insurance, began computerizing policy records in the late 1950s and he remained a strong advocate for technological innovation. His gifts of computers to the School of Business Library in the 1980s were a reflection of his beliefs. True to his word, electronically stored information would become the principal means for financial analysis.

Doug’s career embodied four principles: a life-long commitment to social justice, conservative approaches to investment, a penchant for new technology and charitable contributions for the improvement of education and benefit of minorities. 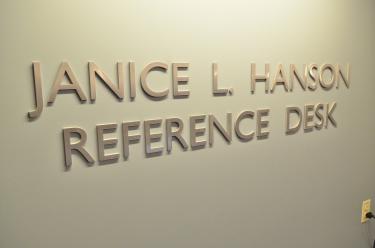 Jan Hanson was a beloved wife and mother who spent her entire adult life as a teacher in the Boulder area. She had many interests and taught at all levels from junior high school to college. She especially enjoyed the time she spent teaching academic and life lessons to expectant mothers in the Teen Parenting Program in the Boulder Valley School District.

Jan married L. Victor Hanson in 1960 and they raised their four children, Lyndon, Douglas, Leta and Tori in Boulder. She enjoyed church, music and friends, but above all, loved being with her husband and children and supporting them in all endeavors. Her outgoing personality and loving nature will be forever missed.

The Hanson family wishes to dedicate the Janice L Hanson Reference desk in the Koelbel Building as a way to remember the love she had for her family and her desire to educate all students she encountered with understand, care and compassion.

If you don’t start somewhere, you’ll never end up anywhere.

It was here in the William M. White Business Library that Justin Gold began turning a business idea into reality. In 2001, Justin came to Boulder to pursue his passion for the outdoors. Without a formal business educational background, he frequently visited the business library and was introduced to professors and mentors that helped refine his business plan to develop “Justin’s,” which grew into a nationally-distributed nut butter-based company. Justin’s has ranked Top 15 on the Inc. 500/5000 Fastest Growing Companies list.

Justin graduated from Dickinson College in Pennsylvania with a degree in environmental studies in 2000. Justin’s wife Nancee graduated from Minnesota State University with a dual degree in international business and marketing in 1996. They have two children.

The Gold family recognizes the importance of having a gathering place for researching and sharing ideas. They are inspired by Leeds for creating a welcoming environment to launch the next generation of business leaders.

Hours may be subject to change
University Libraries Hours Calendar

View location on the Campus Map

Return to the top of the page
Submit Feedback

Thank you for visiting the University Libraries' website. Please fill out the form below to submit comments or questions about our buildings, services, website or any other topic.

If you need research help, please ask a librarian.