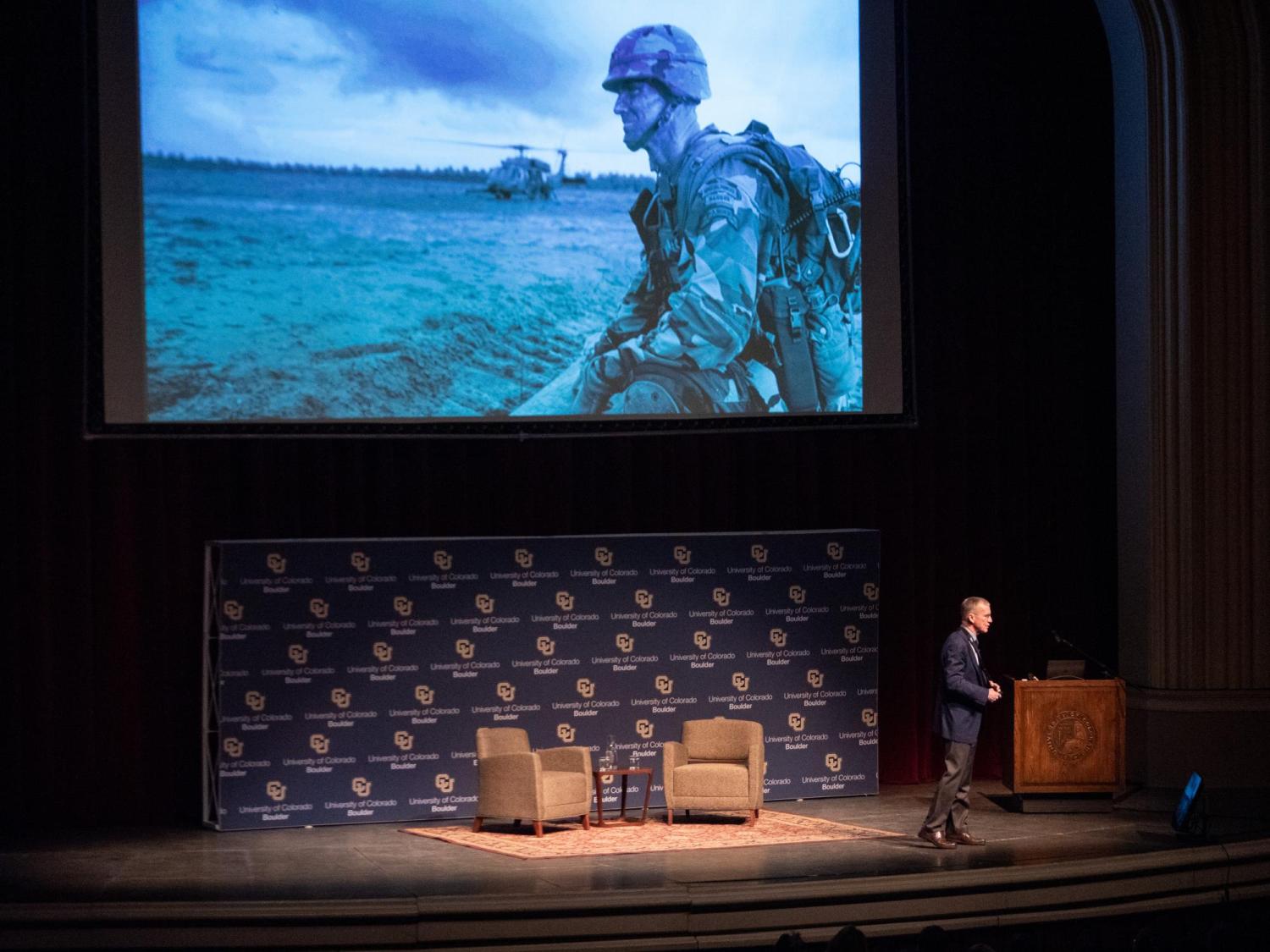 Stanley McChrystal, a retired four-star general and former commander of the Joint Special Operations Command, shared his perspective on the Russian invasion of Ukraine during a talk at CU Boulder Monday night.

While his focus was on leadership in times of uncertainty as part of the Leo Hill Leadership Speaker Series, CU Boulder Chancellor Philip DiStefano asked the general for his thoughts on the war unfolding before the world’s eyes in Ukraine.

McChrystal prefaced his response by noting it was only “one man’s opinion.” 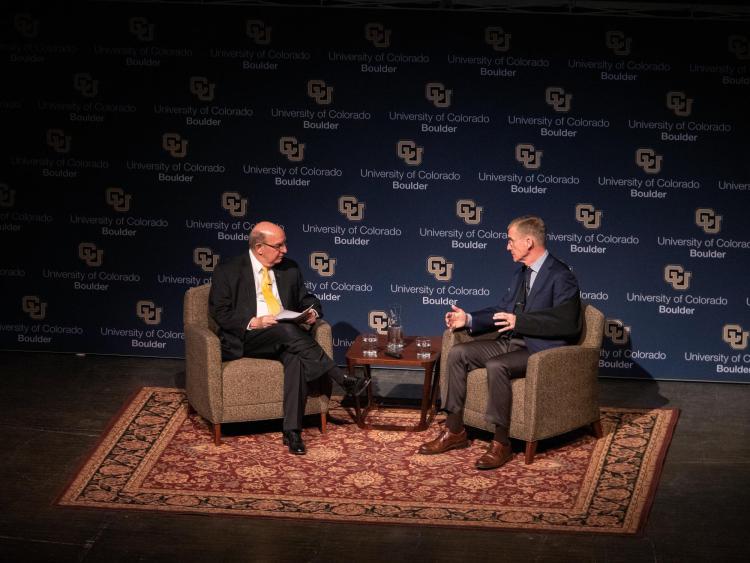 “I think it’s almost a test,” he told the audience of more than 1,000 students, faculty, staff and community members at Macky Auditorium.

“I obviously think we need to.”

McChrystal said Russian President Vladimir Putin made a mistake and “forgot it’s not 1985.”

Putin was not able to conquer Ukraine overnight with military force and present it to the world as a “fait accompli.” There was a lengthy period of posturing, which allowed nations to plan various responses and created global transparency.

“The West did a good job of putting transparency and causing it all to be seen, which made more people not be able to ignore it,” McChrystal said.

Also, Ukrainian defenses are more robust than Putin may have anticipated and Russian forces perhaps not as competent. As for what’s next, McChrystal said nations can’t dodge the issue.

“As this thing plays out, we’ve got to make hard decisions.”

The Leo Hill Speaker Series event also was an opportunity to recognize this year's CU Boulder student leaders of the year award recipients.

McChrystal said Putin is now in an extraordinarily difficult and dangerous position of power and noted this entire situation will become “a bleeding ulcer for him” as it drags on.

Chancellor DiStefano drew applause when he said his thoughts were with the people of Ukraine.

“My hope is that peace and stability will find all of those whose way of life has been threatened in the last week,” DiStefano said. “I feel extremely privileged to have the opportunity to gather this evening in safety, even as so much devastation occurs half a world away.”

McChrystal, co-author of the book Risk: A User’s Guide, was the sixth speaker in the speaker series, a signature program of the Center for Leadership overseen by the chancellor. DiStefano also called out and celebrated the CU Boulder student leaders of the year.

As for leadership and lessons learned, McChrystal shared some salient insights and anecdotes from his storied career on the battlefield and as an expert on organizational leadership.

Take a step back

Many of his life learnings came from taking a step back and examining an issue from a different angle or vantage point. He used the example of Damocles, who focused so myopically on the sword hanging over his head, he was miserable and unable to enjoy the lovely things around him. 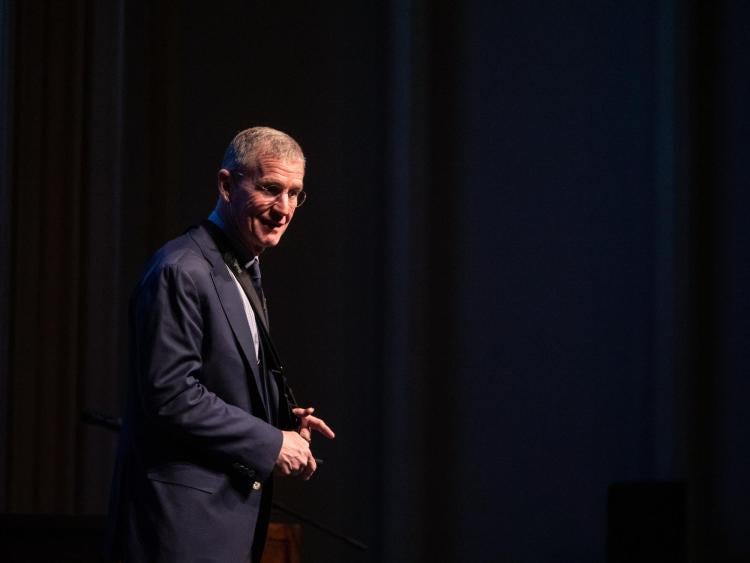 You can fail without being a failure.”
–Stanley McChrystal

McChrystal noted, when you occupy the seat of power and responsibility, it comes with risks like almost everything in life.

“We often get fixated by risk.”

Preparation is key to dealing with any emergent situation or risk. It’s the building of muscle memory, he said, noting that 85% of what we do in any crisis is the same.

In large organizations, it can be challenging to be nimble and adaptive because there is pressure to do things how they have been done before. McChrystal said it’s important to flatten an organization so that information can be shared in real-time with a diverse pool of stakeholders with a shared focus on outcomes. The prevailing institutional or organizational mantra needs to be: If we don’t change, we will fail.

“Now is always the time to create the organization that has the resilience you need. You never know when you’re going to need it.”

McChrystal said it’s vital to have clearly articulated standards for an organization and for yourself. You do those things you think you should do even though they may be inconvenient, frightening or costly.

Self-discipline can also be more practical. McChrystal confirmed rumors that there was a period in his life when—each day—he would run 10 kilometers, eat only one meal and sleep just four hours.

“That all was true.”

Self-discipline also means keeping one’s mood in check and not saying one thing publicly and another privately. If a leader is up and down, it can cause employees or other constituents to act tentatively.

“Leaders can’t be mercurial...Be the kind of leader the organization needs.”

Sometimes, we are the problem

A big factor that drove McChrystal to write a book about risk was to understand why people can be so bad at managing it, even if they have all the knowledge they need to solve a problem.

He cited the response to COVID-19 and Hurricane Katrina as failures in communication and leadership.

An after-action report from a Crimson Contagion emergency response exercise—eerily similar to COVID-19—outlined shortcomings that needed to be addressed. They never were.

McChrystal described the pace of scientific discovery and the rapid rollout of vaccines as miraculous, and yet, political infighting and a poorly coordinated national response resulted in failure because the individual cities and counties did not have the means to fight COVID on their own.

On a personal note, McChrystal acknowledged his own missteps.

McChrystal resigned from his Army career and post leading U.S. forces in Afghanistan after a Rolling Stone article in 2010 included unflattering comments from his aides about the Obama administration. Even though there were issues with the article, McChrystal said it was right for him to take responsibility.

“Everyone in the room is likely to have failure,” McChrystal said, noting the most important thing is what you do right after.

“Don’t relitigate..., just move forward,” McChrystal said. “You can fail without being a failure.” Get a time-lapse view of commencement Students: Staying in Boulder this summer? Here are 5 things to do

If you're living in Boulder this summer and looking for things to do, check out these five ways to stay involved on campus. END_OF_DOCUMENT_TOKEN_TO_BE_REPLACED Now with nine different routes—from short to long, flattish cruise to ‘epic’ climb, and on either road or gravel—Buffalo Bicycle Classic remains focused on the real prize: student scholarships. END_OF_DOCUMENT_TOKEN_TO_BE_REPLACED
Return to the top of the page