Whistleblowers expose big fraud—What makes us so obsessed and what can we learn?

Whistleblowers expose big fraud—What makes us so obsessed and what can we learn?

Almost every streaming service today has a limited series or documentary that details recent fraud cases that have captivated the world: from Anna Delvey to the Tinder Swindler.

One of pop culture’s biggest obsessions, though, has been the Theranos case: a story about a woman, Elizabeth Holmes, who took Silicon Valley by storm with her company, Theranos, that claimed to have developed a revolutionary blood testing method that could detect diseases with just a pinprick of blood.

One aspect of the story that makes Theranos stand out above the rest is the role that whistleblower Tyler Shultz, a young research engineer in the company, played in exposing the lies and deception by Holmes and Theranos president and COO Ramesh “Sunny” Balwani. Shultz will be on campus Tuesday, April 12 for a panel exploring whistleblower ethics hosted by the Daniels Fund Ethics Initiative (DFEI) Collegiate Program at the University of Colorado Law School. 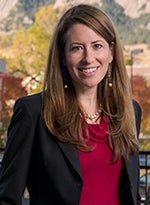 In this Q&A, DFEI Director Melanie Kay shares insight into why these cases—especially those involving whistleblowers—are so fascinating and what future lawyers and the general public can learn from them.

Why has society has become fascinated with whistleblower cases like Theranos?

I think they’re fascinating because it takes a lot of moral courage and integrity to be a whistleblower, and it naturally makes each of us question how we’d respond to these types of situations. While most of us would say we’d want to do the right thing, people actually living through these situations tend to keep quiet. Most whistleblowers face severe, long-term personal and professional consequences that can feel really daunting. So, what makes these high-profile whistleblowers so different or unique? It’s a really interesting thing.

How do these cases go on for so long before they’re caught?

Each case has different reasons, but a big part of why Theranos kept its deception going for so long was a lack of effective oversight by a board of directors. The board was mostly inexperienced in the technological and scientific aspects of the company’s work (which was very likely by design) and didn’t have any real power to challenge Elizabeth Holmes. She kept such tight control on information and was so successful at harnessing the power of Silicon Valley’s startup culture that creates celebrities out of CEOs, that no one ever really asked her the hard questions or demanded accountability or transparency.

Who: Open to the public
What: Whistleblower Ethics: Tyler Shultz on Theranos, Integrity, and Resilience in Silicon Valley
When: Tuesday, April 12, 5–7 p.m.
Where: Wittemyer Courtroom at Wolf Law, or online

That, in combination with the company’s silencing of all internal questioning or dissent, meant it took a long time for the real information to come out, in large part thanks to very brave whistleblowers such as Tyler Shultz. Even after that, the legal process takes a really long time: There need to be thorough investigations, and prosecutors need to build their case. The “wheels of justice” tend to be a bit slow, but that isn’t always a bad thing.

Are these types of massive fraud cases becoming more prevalent, or are they just more noticeable in the digital age?

I don’t think they are any more prevalent. There seem to be cycles where a few high-profile scandals catch the public interest, we talk about them a lot and then things die down until the next wave comes. For example, in the accounting scandals of the early 2000s, Enron and Worldcom made huge headlines to the point that TIME Magazine named “whistleblowers” their person of the year in 2002. Not that long after, bad behavior at a lot of major banks was unveiled during the mortgage-backed securities crisis. Lately it’s been more startups and social media companies (Theranos, Facebook, Uber).

What lessons can young and future lawyers learn from studying cases such as the Theranos case?

Not just future lawyers, I think anyone can learn a lesson of the importance of ethical culture and making ethical principles the bedrock of any organizational identity. It’s important that businesses: have strong ethics and compliance programs, have ethical principles built into their identity, are fostering an ethical culture and are incorporating appropriate and effective checks and balances, among others. It’s also helpful to understand ethical behavioral psychology, including “why good people do bad things,” and how to create tools to counteract those impulses.

I’m hopeful the next generation of business owners and executives will be focused on proactive prevention rather than reaction and more motivated by doing the right thing and their long-term viability. My students now really bring their values along with everything they do—whether choosing where to buy products from or where to take a job. It’s inspiring. Join Colorado Law as a distinguished panel of former U.S. Supreme Court clerks and legal scholars discuss the notable cases the U.S. Supreme Court decided during the 2021–22 term and the impact of those decisions on practitioners. END_OF_DOCUMENT_TOKEN_TO_BE_REPLACED Understanding the historical context and significance of Juneteenth

Tina McDaniel, a retired human resource professional, passionate social justice advocate and diversity, equity and inclusion leader will lead an honest conversation about the remembrance and celebration of Juneteenth during a virtual event June 16. END_OF_DOCUMENT_TOKEN_TO_BE_REPLACED
Return to the top of the page